As a partner in a New York law firm, it is easy to focus on local and state issues that are likely to impact our clients. However, appreciating that environmental issues are not constrained by state boundaries, this article looks at the work of land trusts and other nonprofits throughout the Northeast to address land conservation regionally. As communities across the country become more connected in our modern society, the future of conservation requires regional, national and global partnerships.

Traditional approaches to land conservation are no longer sufficient as development pressures increase and climate change persists. An increasingly fragmented landscape creates isolated pockets of wilderness suppressing the natural movement and growth of flora and fauna. Recognizing that this unhealthy trend will result in the collapse of significant ecosystems, land trusts, various other nonprofits, and government agencies are working in the northeast to preserve links and corridors for numerous critical habitats.

In a press release from The Nature Conservancy (TNC) reported by VT Digger (October 2018), TNC explains that climate change is driving species to move 11 miles farther north and 30 feet higher in elevation per decade. In combination with human encroachment and the loss of open space, this additional need for wildlife and habitat movement created by a changing climate is alarming. Specifically using Vermont as a reference, TNC emphasizes the importance of habitat connectivity. “Vermont lies at the crossroads of an extensive wildlife habitat network reaching from the Tug Hill plateau in New York, across the Adirondacks and the northern reaches of New England, and on to the Canadian Maritime provinces.” While Vermont’s location makes it a vital participant in connectivity conservation projects, the entire northeast region has become the focus of a fairly new conservation initiative.

TNC’s commitment to connectivity projects is further demonstrated through its involvement in the partnership of 55+ organizations known as the Staying Connected Initiative (SCI). The SCI describes itself as an “international collaboration working to sustain the forested landscape connections” across the Northern Appalachian and Acadian region of the U.S. and Canada. SCI’s linkages traverse the northeast from New York and Massachusetts, through Vermont, New Hampshire and Maine, to Quebec, New Brunswick and Nova Scotia. This impressive partnership includes the governments/agencies of the same three Canadian provinces and five U.S. states that are the focus of the project’s linkages. SCI seeks to conserve, restore, and enhance landscape connectivity across the region with a fundamental goal of protecting native wildlife and plants from the impacts of habitat fragmentation and climate change.

Connecting with the Berkshires

Less than an hour’s drive from our offices in Albany, the Berkshires are a range of hills (the range includes mountains) lying roughly between the Connecticut and Housatonic Rivers in Massachusetts, extending from the Vermont border south to northern Connecticut.i Beyond its well-known cultural landscape, I personally find the Berkshires to be a surprisingly diverse natural landscape, delivering plenty of choices for the outdoor enthusiast.

From south to north, the Berkshires encompass thousands of acres of public land, including seven large parks and the Appalachian Trail. According to SCI, there are more than 40 roads along the 90 miles of Appalachian Trail. The increasing forest fragmentation from development and roads in the Berkshires is dividing ecosystems into more isolated pockets of habitat, resulting in dire consequences for the plant and animal species of the region.iii 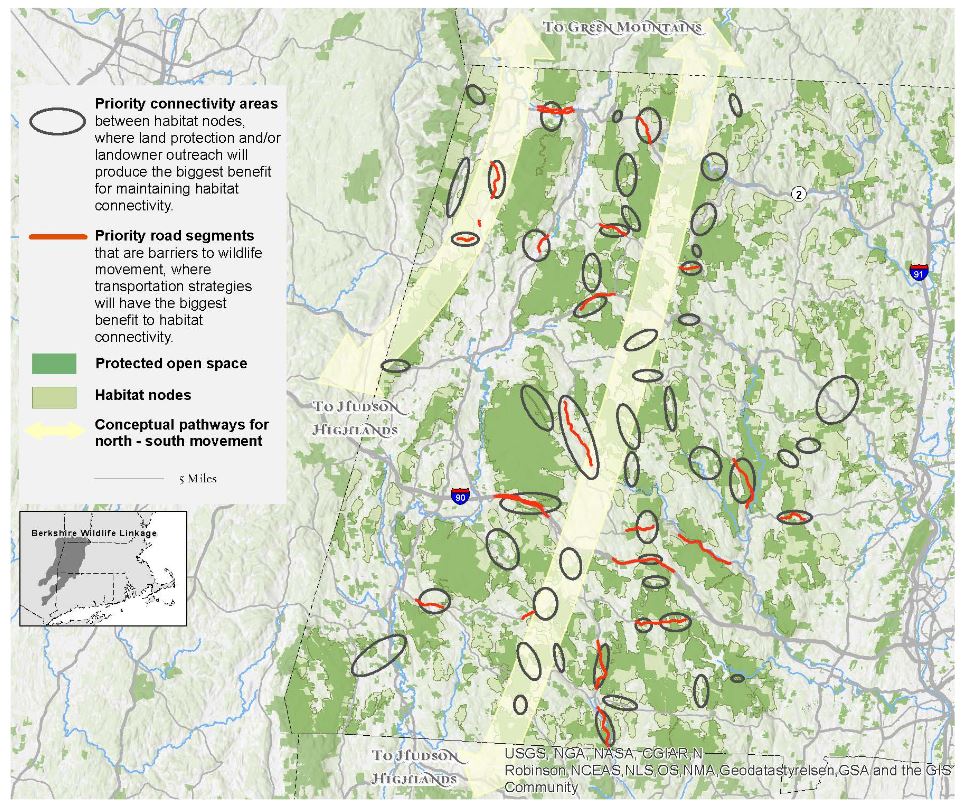 In response, TNC and its SCI partners are maintaining existing connected ecosystems and restoring links between fragmented areas of the Berkshires. SCI is working to protect and connect core habitats using natural and man-made corridors, allowing people to continue travelling along roads, while wildlife and water move freely under that same infrastructure. The overall goal is a reconnected landscape stretching from New York and Connecticut to Vermont and beyond. Mammals, amphibians and other moderately mobile wildlife populations will be the measuring stick for success.

A protocol for rapidly surveying bridges and culverts to understand wildlife passages is currently integrated into the North Atlantic Aquatic Connectivity Collaborative online database.iv Staff with The Nature Conservancy informed me that “nearly 200 road-stream crossings in Massachusetts and New Jersey have been surveyed with this protocol.” The Massachusetts Department of Transportation is using the data to inform culvert and bridge contractors on how to maintain or improve wildlife passage as part of their contracts. “A final report in February 2020 will use the terrestrial passage surveys to summarize the permeability of road segments in western Massachusetts to wildlife. This may be a useful tool for other SCI Linkages and states.”

Road-stream crossings in New Jersey have also been surveyed as part of a regional connectivity effort. These crossings may reveal options for the possibility of another habitat and wildlife linkage area connecting a natural landscape from New Jersey to the Green Mountains in Vermont. Currently a patchwork of state parks and public land in northern New Jersey along the Sterling Ridge and Ramapo Mountains connects to Sterling Forest State Park in New York. Sterling Forest then connects to Harriman State Park, also in New York. This corridor crosses the Hudson River moving north toward the Taconic Range and the Berkshires of Massachusetts.

Fran Ryan, reporting for the Daily Hampshire Gazette on December 12, 2019, cites a conservation success story within the Massachusetts towns of Westhampton, Williamsburg, Northampton and Chesterfield. “New England is now losing 65 acres of forest to development every day,” according to a recent Harvard Forest Report cited by Ryan. In an effort to slow this trend two local land trusts, MassWildlife (MA Division of Fisheries and Wildlife), individual landowners and the four towns, joined forces to successfully conserve 1,033 acres of land known as the Brewer Brook Project. “The newly conserved lands are within a 6,000-acre expanse of mostly undeveloped forest. While preserving and improving the management of these valuable areas, permanent protection also provides public access to thousands of acres of land for hunting, fishing and recreation.”v

TNC staff identified to me the Brewer Brook Project as an example of a great land protection success story for 2019, and was excited that state grant funding came through to close the project by year’s end. The project came about in part as a consequence of land trusts connecting and working together in the Berkshire Wildlife Linkage. TNC classifies the protected lands as a vital section of a forest core in the Berkshires. The Brewer Brook area includes further large tracts of forest that are ideal for additional conservation projects and habitat connectivity for the Berkshire Linkage.

Adirondacks to the Green Mountains

Here in New York, the Lake Champlain Land Trust (LCLT) points out on its website that we must work to save “the critical ‘stepping stone’ forested areas that connect larger wildlife natural areas.” These stepping stones are smaller undeveloped forest blocks between larger natural areas. LCLT works with landowners who recognize the value of conserving these stepping stones as important connection habitat. By illustration, LCLT’s Whitehall Cliffs Natural Area in Whitehall, New York, provides a safe corridor for wildlife traveling between New York’s Adirondacks and Vermont’s Green Mountains. “Connected habitat areas provide safe places” for flora and fauna to disperse and migrate.vi

The Staying Connected Initiative and other similar corridor or habitat connection projects are successfully linking open space and vital natural habitats across the country. These projects have become familiar in western states for wildlife migrations and other successful conservation initiatives. In eastern states, where population density has historically been greater, and urban development as well as suburban expansion have been a typical part of the landscape, protection of the remaining natural habitat is crucial. The work of SCI and similar preservation efforts offer a promising future for conservation in the northeast.